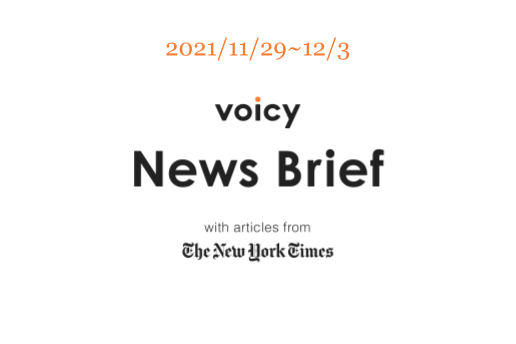 The Holiday Shopping Season Is Here, but Is It Back?

Americans more comfortable with in-store shopping were back out in greater force Friday, and battered retailers were more optimistic than they have been at any point since the start of the pandemic, which shuttered stores and wiped out sales.

But looming over an otherwise upbeat symbolic start to the holiday sales period — a time when some companies register more than half their sales — was the persistent threat that the coronavirus poses to public health and commerce. That anxiety took on greater urgency in recent days after evidence of a new coronavirus variant in South Africa prompted some countries to reinstate travel restrictions.

The emergence of the new variant was the latest hurdle for retailers who have been anticipating a holiday shopping season that is sure to be much more physically present than 2020 but not as carefree as it was pre-pandemic.

The Macy’s Thanksgiving Day Parade was massively expanded, with more floats and a longer route, though children under 12 were not allowed to participate in the parade itself. Big chains will offer certain festivities, like Champagne bars, that were missing last year. Gift ideas and decorations will feature more prominently in stores as retailers anticipate more people browsing and planning bigger gatherings.

“There’s a lot of pent-up energy to do things,” said Marie Driscoll, managing director of luxury and fashion at Coresight Research, an advisory and research firm. “Everything old is new again.”

But hallmarks of a changed season remain. Many stores were closed on Thanksgiving, and holiday hours at certain malls and chains will be shortened, in part because of a national labor shortage. And many people are bracing for a dearth of products like popular toys as “supply chain issues” becomes the refrain of 2021. There are also those customers who will stay away from stores, based on new habits adopted during the pandemic or ongoing concerns about the virus, and opt to shop online or using curbside pickups.

Driscoll said that signs of precautions would likely be visible throughout stores. “Retailers are going out of their way to make everybody feel comfortable, so at your own discretion you’re wearing a mask; there will be cleansers everywhere; there are options for self-checkout to not necessarily have to queue up and wait in lines,” she said.

Will the Vaccines Stop Omicron? Scientists Are Racing to Find Out.

As nations severed air links from southern Africa amid fears of another global surge of the coronavirus, scientists scrambled Sunday to gather data on the new omicron variant, its capabilities and — perhaps most important — how effectively the current vaccines will protect against it.

The early findings are a mixed picture. The variant may be more transmissible and better able to evade the body’s immune responses, both to vaccination and to natural infection, than prior versions of the virus, experts said.

The vaccines may well continue to ward off severe illness and death, although booster doses may be needed to protect most people. Still, the makers of the two most effective vaccines, Pfizer-BioNTech and Moderna, are preparing to reformulate their shots if necessary.

Even as scientists began vigorous scrutiny of the new variant, countries around the world curtailed travel to and from nations in southern Africa, where omicron was first identified. Despite the restrictions, the virus has been found in a half-dozen European countries, including the United Kingdom, as well as Australia, Israel and Hong Kong.

Already, omicron accounts for most of the 2,300 new daily cases in the province of Gauteng, South Africa, President Cyril Ramaphosa announced Sunday. Nationally, new infections have more than tripled in the past week, and test positivity has increased to 9% from 2%.

Scientists have reacted more quickly to omicron than to any other variant. In just 36 hours from the first signs of trouble in South Africa on Tuesday, researchers analyzed samples from 100 infected patients, collated the data and alerted the world, said Tulio de Oliveira, a geneticist at the Nelson R. Mandela School of Medicine in Durban.

Within an hour of the first alarm, scientists in South Africa also rushed to test coronavirus vaccines against the new variant. Now, dozens of teams worldwide — including researchers at Pfizer-BioNTech and Moderna — have joined the chase.

They won’t know the results for two weeks, at the earliest. But the mutations that omicron carries suggest that the vaccines most likely will be less effective, to some unknown degree, than they were against any previous variant.

South African doctors are seeing an increase in reinfections in people who already had a bout of COVID-19, suggesting that the variant can overcome natural immunity, said Dr. Richard Lessells, an infectious diseases physician at the University of KwaZulu-Natal.

In 1892, the brick building at 1005 W. Third St. had several large windows that allowed the residents of Dayton, Ohio, to peek inside and see the Wright brothers, who were still years from becoming pioneers of flight, run their bicycle shop.

Now, the windows are gone, plywood is in their place and the building could soon be demolished.

A Dayton zoning appeals board on Tuesday approved the city’s request to demolish the building where the state legends Wilbur and Orville Wright opened their first successful bicycle business. City officials plan to review developers’ proposals for the space and then decide who should be awarded the property.

The building, all parties agree, is dilapidated. But its potential demolition is pitting some officials, who say the building is dangerous and a nuisance to neighbors, against preservationists, who contend that it holds historical importance and, if redeveloped, could qualify for tax credits.

The debate in Dayton echoes those that have taken place in other parts of the country, in which preservationists, developers and municipal officials have wrangled over the future of local properties with strong historical ties.

On an island off Miami Beach, Florida, residents and city officials were divided over whether to raze Al Capone’s former mansion. On Astor Row in Harlem, New York, an 1883 house that had been declared a landmark was unceremoniously razed last month.

In Dayton, public meetings were held. Letters were sent. After the landmarks commission rejected the city’s demolition request because it wanted the city to try to preserve the facade of the building, the city appealed and won a decision by the board of zoning appeals, which voted 5-1 to reverse the denial.

The Wright brothers became significant figures in aviation history when they created a fragile machine in 1903 that sustained flight, cementing them as the first people to successfully fly an airplane.

SAN FRANCISCO — Jack Dorsey stepped down on Monday as chief executive of Twitter, the social media site he co-founded in 2006 and guided through the tumultuous years of the Trump administration and increasing calls for regulation from lawmakers around the world.

He was replaced by Parag Agrawal, the company’s current chief technology officer who has recently been working on technologies associated with cryptocurrencies, which have become a fascination of the tech industry’s power brokers, including Dorsey.

Dorsey’s exit marks a significant shift at the company, which has navigated years of pressure from investors who thought it did not make enough money and criticism from Washington, particularly Republican lawmakers who complained Twitter has helped stifle conservative voices in social media.

The most prominent of those voices was that of former President Donald Trump, who used his Twitter feed to threaten enemies and keep his allies in line. Twitter banned Trump shortly after the Jan. 6 attack on the Capitol.

Dorsey, 45, who is also the chief executive of the payments company Square, was fired from the top job at Twitter in 2008 but returned in 2015. Dorsey’s plans were first reported by CNBC. A Twitter spokeswoman declined to comment beyond the announcement.

Dorsey said in an email to Twitter employees that he wanted Twitter to stop being a founder-led company, which could be a weakness over time.

“I’ve worked hard to ensure this company can break away from its founding and founders,” Dorsey wrote. “I believe it’s critical a company can stand on its own, free of its founder’s influence or direction.”

Dorsey’s leadership and focus had been questioned by employees and investors for some time. His departure comes a year and a half after he survived an attempted ouster from the activist investor Elliott Management.

Chief among Elliott’s concerns was that Dorsey’s attention was divided between the two companies he led. The firm believed that Twitter had fallen behind social media rivals in increasing its stock price and adding innovative new products.

Dorsey, who will remain on Twitter’s board until its next election in 2022, stressed that he had made the decision to leave and had not been forced to go.

Agrawal is a low-profile figure who started his career at Twitter over a decade ago, as an engineer. He worked his way up through the company and was made its chief technology officer in 2017.

Jerome Powell, the Federal Reserve chair, signaled on Tuesday that the central bank is growing more concerned about high — and stubborn — inflation, and could speed up its plan to withdraw economic support as it tries to ensure that rapid price gains do not become long-lasting.

His comments, delivered during a Senate Banking Committee hearing, came at a challenging economic moment for the Fed. Prices for food, shelter and other items are rising quickly, millions of workers have yet to return to the labor market and the virus continues to pose risks to the economic outlook, most recently with the new omicron variant.

The Fed had been buying $120 billion in government-backed securities each month throughout much of the pandemic to bolster the economy by keeping money flowing in financial markets. In November, officials announced plans to slow those purchases by $15 billion per month, which would have the program ending midway through 2022. But Powell signaled on Tuesday that the central bank could wrap up its bond-buying more quickly, cutting down the amount of economic juice the Fed will add in upcoming months.

“At this point, the economy is very strong, and inflationary pressures are high,” Powell said during a hearing before the Senate Banking Committee. “It is therefore appropriate in my view to consider wrapping up the taper of our asset purchases, which we actually announced at our November meeting, perhaps a few months sooner.”

Powell said he expected Fed officials to discuss slowing bond purchase faster “at our upcoming meeting,” which is scheduled for Dec. 14-15.

The economy has boomed back this year, and hot demand has collided with constrained supply to push inflation sharply higher. The central bank has slowly reoriented its economic policy stance as price gains remain stubbornly elevated, trying to put itself in position to react if needed. Now, the Fed appears to be pivoting more aggressively — and focusing more concertedly on controlling rapid inflation.

“Generally, the higher prices we’re seeing are related to the supply-and-demand imbalances that can be traced directly back to the pandemic and the reopening of the economy, but it’s also the case that price increases have spread much more broadly in the recent few months,” Powell said Tuesday. “I think the risk of higher inflation has increased.”